Voluminosity, killing colours and the crap guesthouse - a story of non metallic metals with Alfonso Giraldes.

So the weekend of 30/31st August was my date of destiny, the days i spent some time with Banshee (Alfonso Giraldes). My painting life has been on and off for six years and despite some awards there has been something missing, a spark, an ingredient or possibly an encounter that would push my painting or at least my knowledge and understanding to the next level. 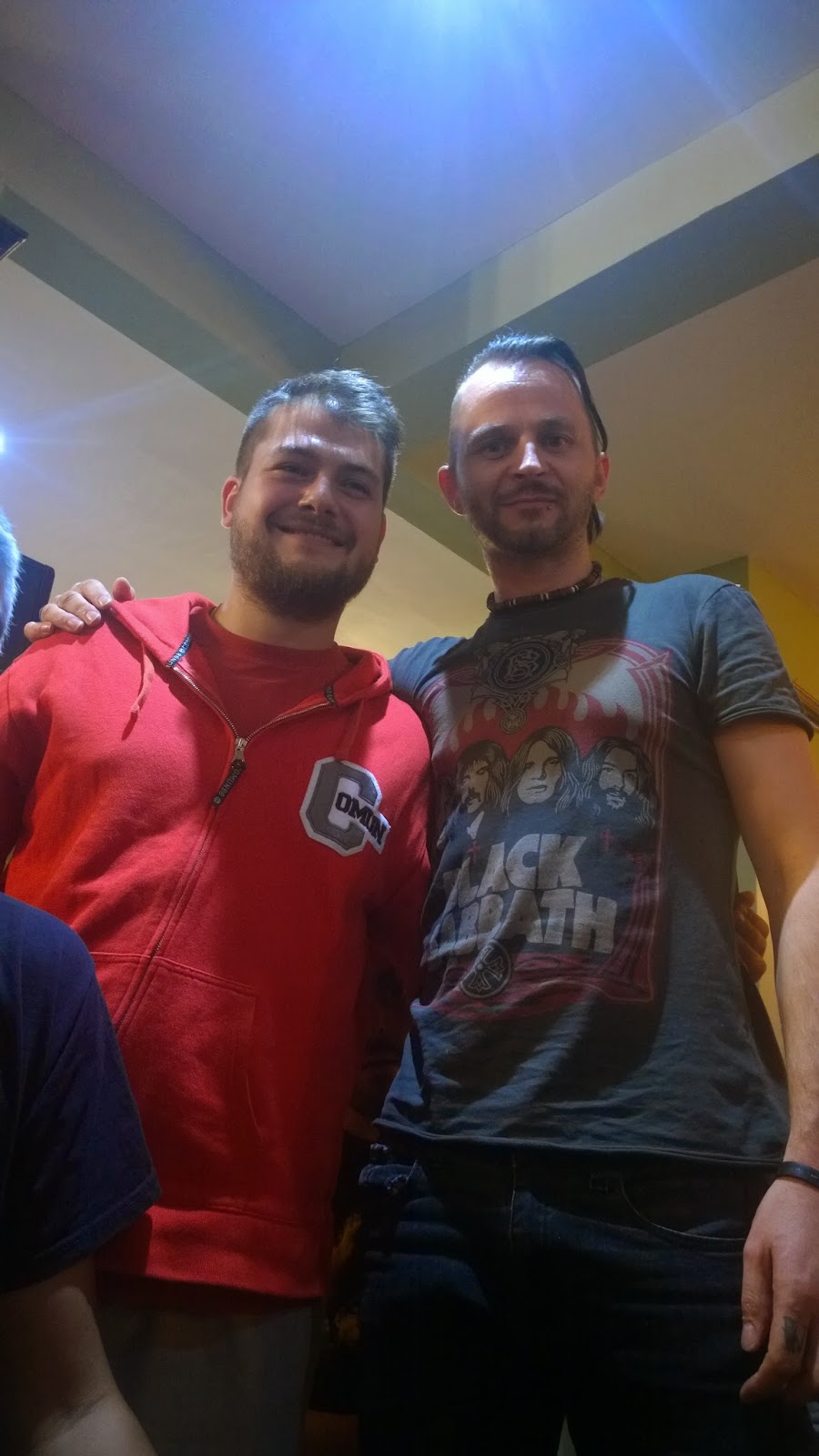 I am always submersing myself within the hobby to learn and become a better painter but i feel that my progress is rather erratic to say the least. I paint well when i am happy and confident and that is usually when i am painting in my comfort zone and as such i don't really enjoy trying new things, even though i am aware that that is exactly what i need to do to improve. Having met and been inspired by Alfonso, that is exactly what i intend to do over the next period of my painting life.

I only now wish I had attended Alfonso's workshop on colour theory previously, perhaps i will pester him for his kowledge over the coming months. This workshop was on NMM, a technique i have always been too scared to experiment with, but Alfonso gave us so much more. If I was to be asked "can i now paint NMM", the answer would still be no, however, I am now armed with the knowledge of the technique to practice. Other than the knowledge and insight that i gained, it was witnessing first hand Banshee's innate understanding of colour theory and his organic approach to painting which blew my mind and has inspired me to be more free and expressive with my own painting. As much as his painting style seems accomplished with organic brush strokes and bravery, it only evolved this way once he had perfected his technique, supported by his knowledge of colour theory, light and volumes. 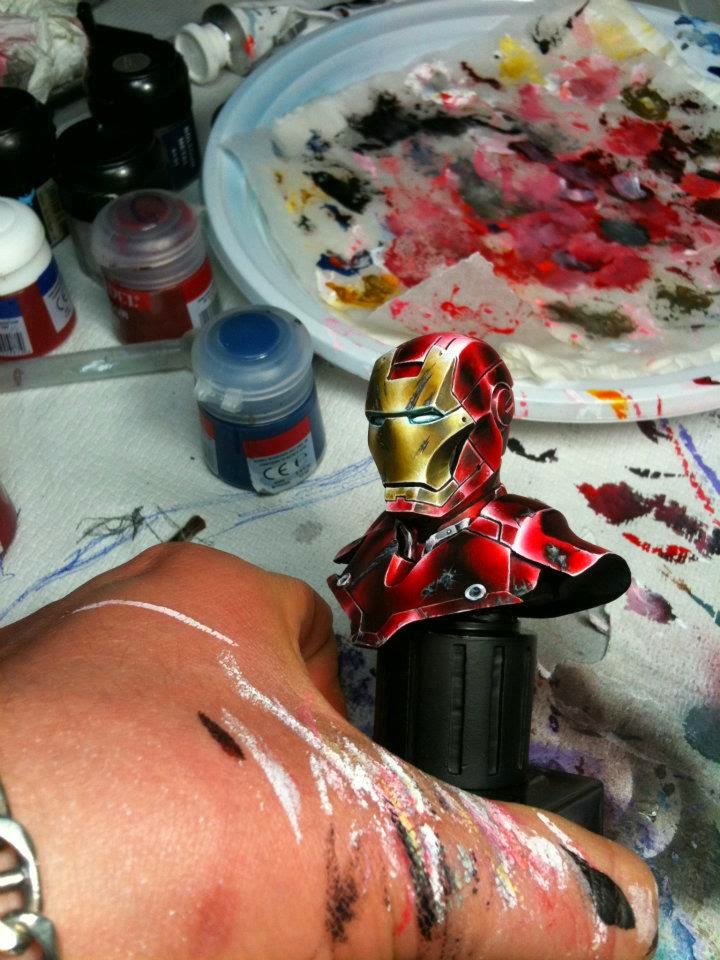 So, let me tell you a little bit about Day 1. Once we had all arrived (me doing so an hour and a half early, don't ask) at Inner Sanctum and John (Founder of The weekend Workshop) and the rest of the guys arrived and we all made our introductions and set about setting up our workstations. Once we were all settled, Alfonso was straight in with some hard core theory and putting the frighteners on us straight away by announcing that "achieving a 3D technique is very difficult even on a three dimensional miniature when trying  nmm as you are trying to achieve an optical illusion", that is imitating how light reacts upon different volumes, it is all about the technique and not necessarily the range of colours you use.

Before choosing your midtone colour for the effect, Alfonso mentioned the importance of colour theory and the contrast achieved through warm and cold tones (for eg yellow is relatively warm whereas blue is colder). So choosing your midtone colour would depend upon the atmosphere, location, effects etc that you wish to portray with your miniature. So you choose your mid tone colour for the overall effect and feeling and then work on contrast whether it be high or low, which i will discuss a little bit later. I was told that Gold NMM can be a bit more limiting with the range of tones that can be successfully used, compared to Metal NMM (tones of grey). This is mostly because gold tones are very saturated and "yellowy", either side of the midtone and the gold colour is almost fleshy in colour or too brown, so would either not look metallic at all or would be heading towards a bronze or brass tone. 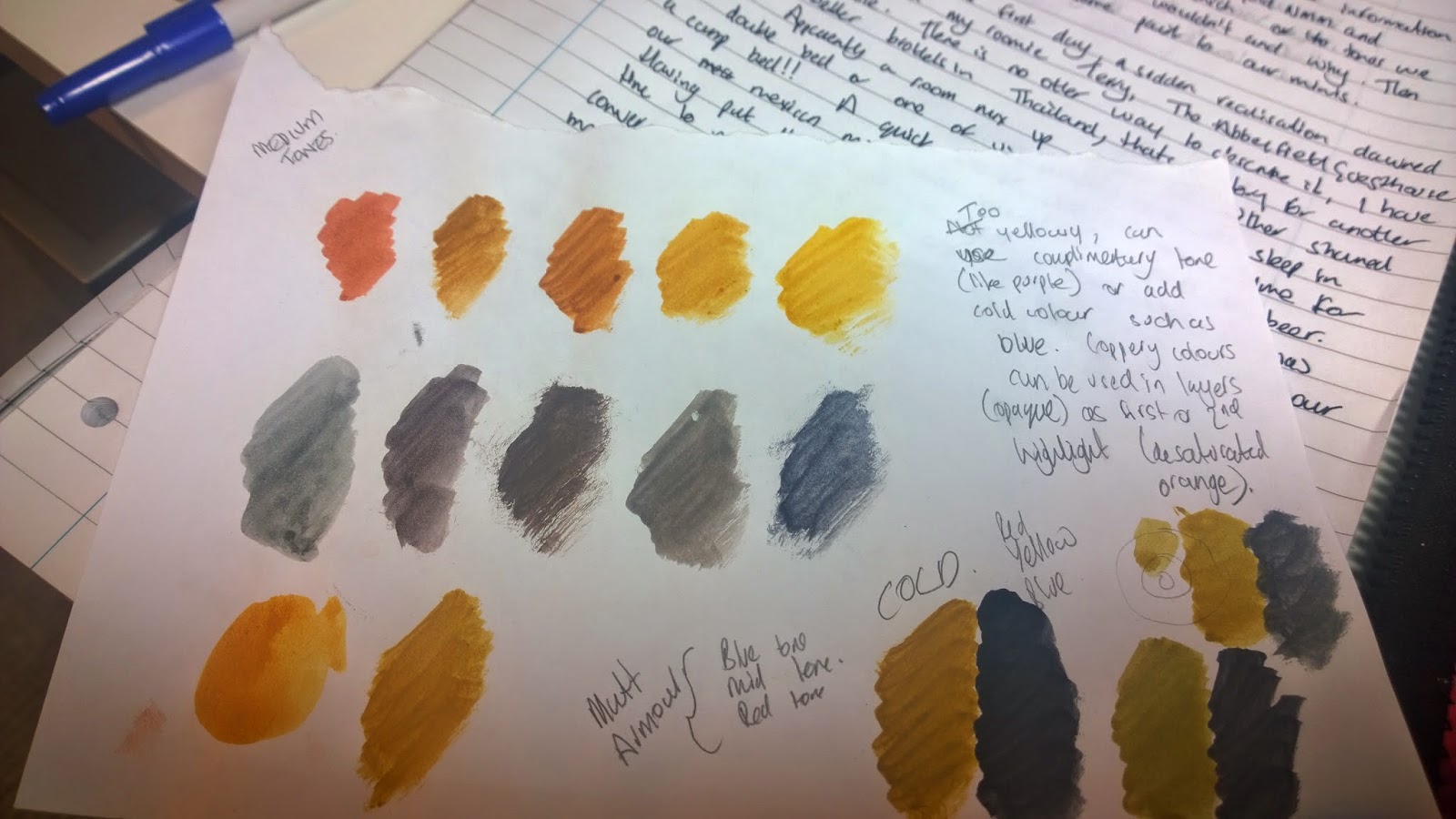 A gold midtone that is too "yellowy" can be modofied by cooling the colour, by adding a cold colour such as blue or by using a complimentary colour, a colour that sits opposite on the colour wheel ie purple. Your midtone and subsequent colours will also be influenced by the colour of your basecoat.

If using a black basecoat, there is no point using thin, translucent layer of colour to highlight, so your paint should be thicker to cover the darker basecoat underneath to highlight and you will need fewer layers to apply your shadows. Black basecoats are particularly useful when the miniature and it's scene are of a dark or gritty atmosphere. In contrast to this, a white basecoat would mean using several, very dilute, translucent layers of paint. As such a grey basecoat is regularly seen as the ideal compromise as your highlights can be achieved with reasonably dilute layers and the same applies for the shadows too. 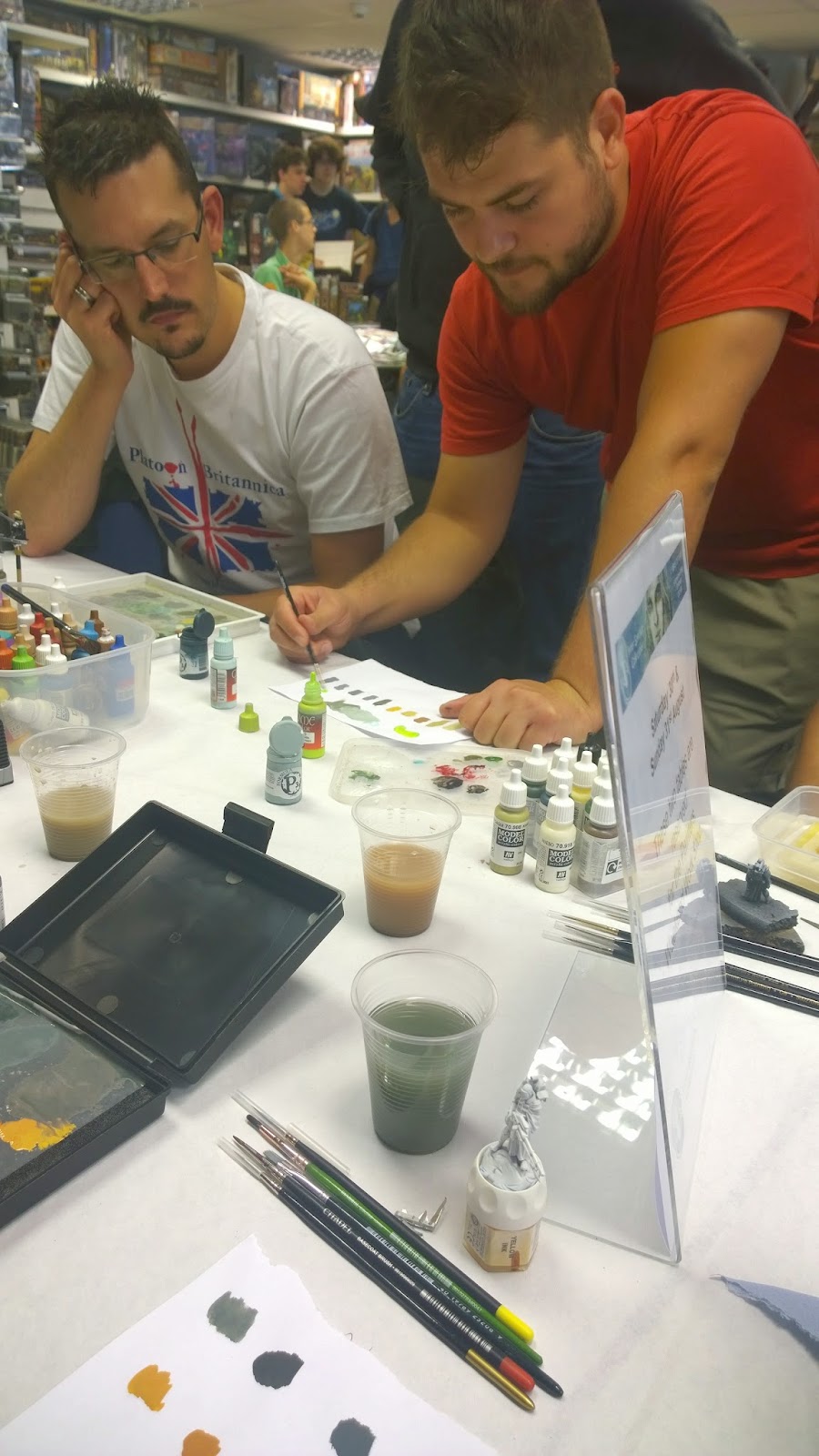 Darker midtones however will result in starker transitions or in other words, the progression to the dark tones will be much shorter and conversely a lighter midtone will require more transitions to the shadows. These transitions will also be influenced by the type of surface or volume and whether the material is of a matt or shiny nature.

By now , my brain was starting to hurt, I can't lie.

Any colour grey can be used for the silver but as already mentioned, gold is more limiting, as the tone must retain a yellow hue for the effect to be believable, however, too much yellow and the effect can become artificial looking, with particular regard to the brightness. If you think about how we perceive colours in real life, there seems to be a "grey filter" over what we see and as such we should try to replicate this to prevent our colour schemes becoming too artificial.

Metallics generally have colder tones but varying hues and nuances can make the effect visually more interesting. Alfonso even showed how it was possible using a "flesh" midtone, he explaned that the red in the mix needed to be countered (killing the colour in an epic duel of saturated verses unsaturated colours ;)) for instance with green to desaturate the colour and make more grey. 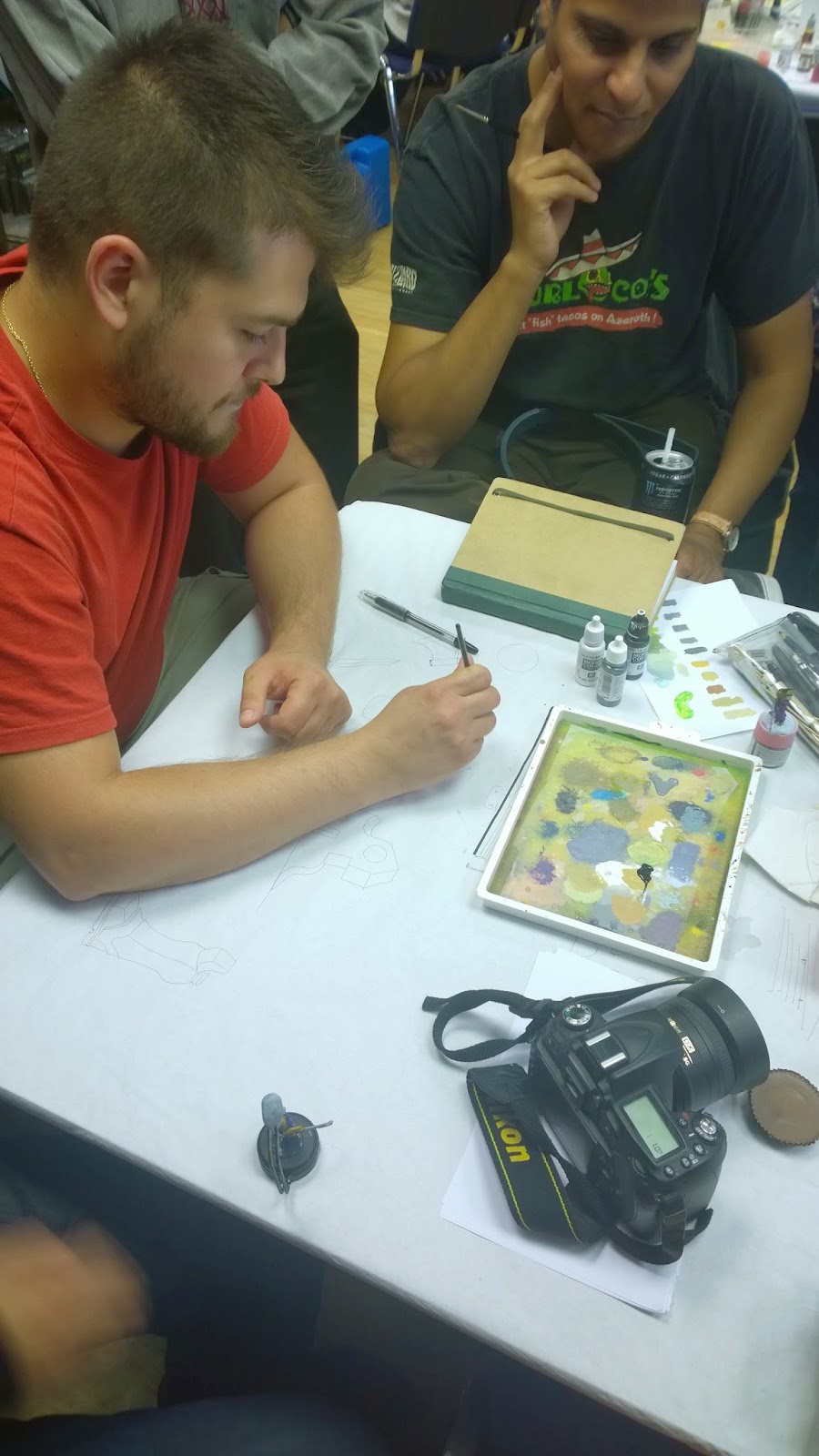 Another consideration is the various shapes or volumes that constitute the various armour plates or planes of weapons and whether the metal would be of a shiny or matt nature, as i alluded to earlier. Shiny metals have a brighter midtone and sharp transitions whereas matt metals begin with a duller midtone accompanied with gradual transitions.

Alfonso went to great lengths, showing us with visuals and quizzing us, how light interacts with various types of surfaces. For instance, a straight plane would receive the same level of light along it's whole surface, unless it was partially shaded of course, whereas a non reflective material with no side plane would result in the light diffusing across the surface. 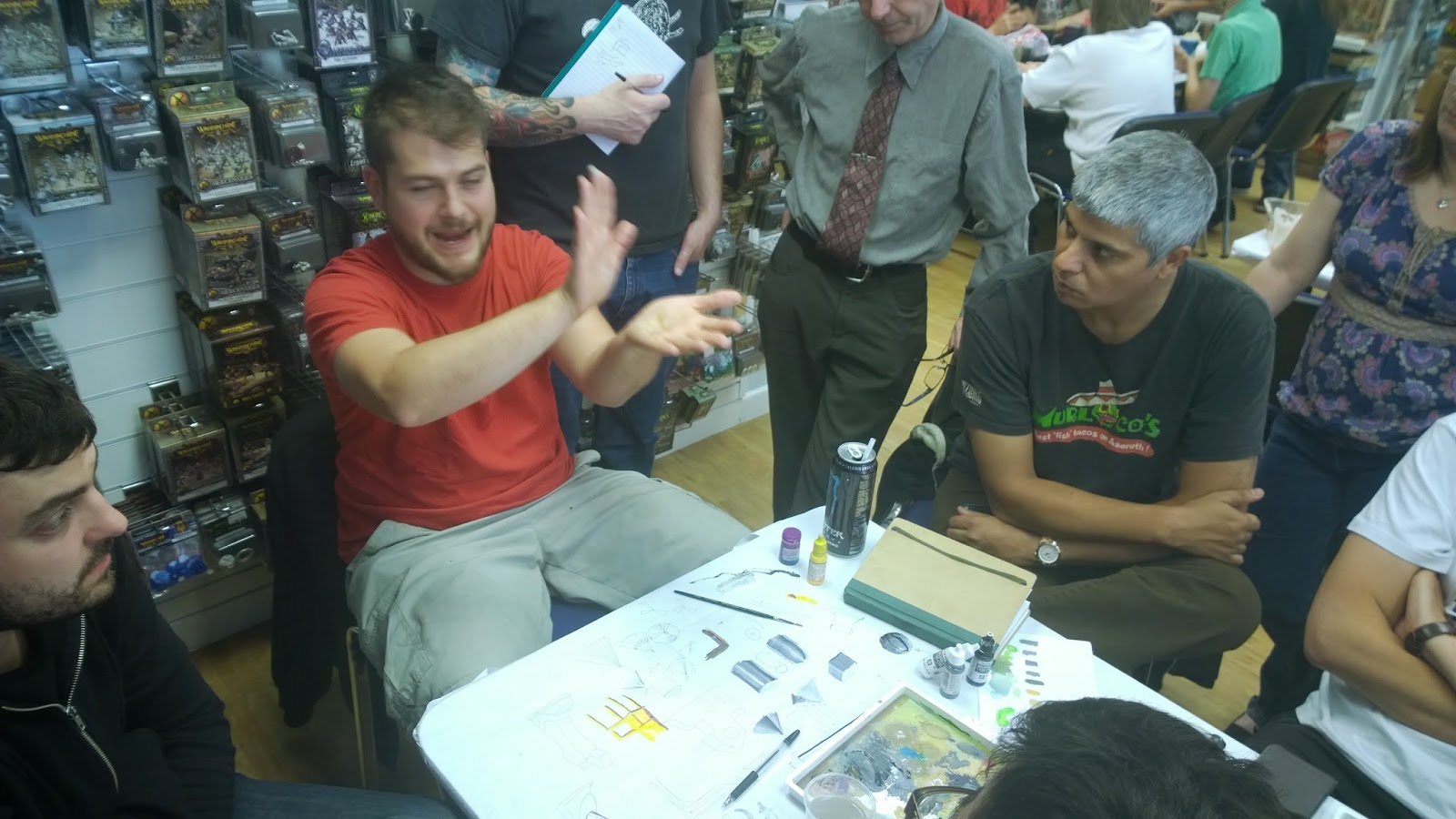 More complex behaviours such as reflections (if you are painting a shiny metallic effect) will create multiple gradients from light, midtone and shade across the surface. In addition,more reflective surfaces can be implied by adding stronger contrast at the planes.

After our brains had been fried with all this information and we had chosen five midtones of Gold NMM and Silver NMM, Alfonso showed us which of the tones we had chose would work and which wouldn't and why. Then it was down to applying some paint to our minis.

First day down and terry and I were just about to find out how shocking our Guesthouse truly was, a camp bed, rowdy guests, unhygienic bathroom, a shower with no temperature control believe me, the list goes on but i can't be arsed getting worked up about it, suffice to say I won't be visiting it again. So a quick shower and me and my roomie turned up suitably late in a stylish fashion for our meal at Chiquito's and headed straight for the bar. Having put the world to rights over a steak and several pints, the laughs and stories soon started circulating round our table. Would Banshee take his drink to the toilets or was Mr Volomir telling porkies about Spanish people? The drink stayed on the table during all toilet visits, apparently he trusted us mahawawawa! 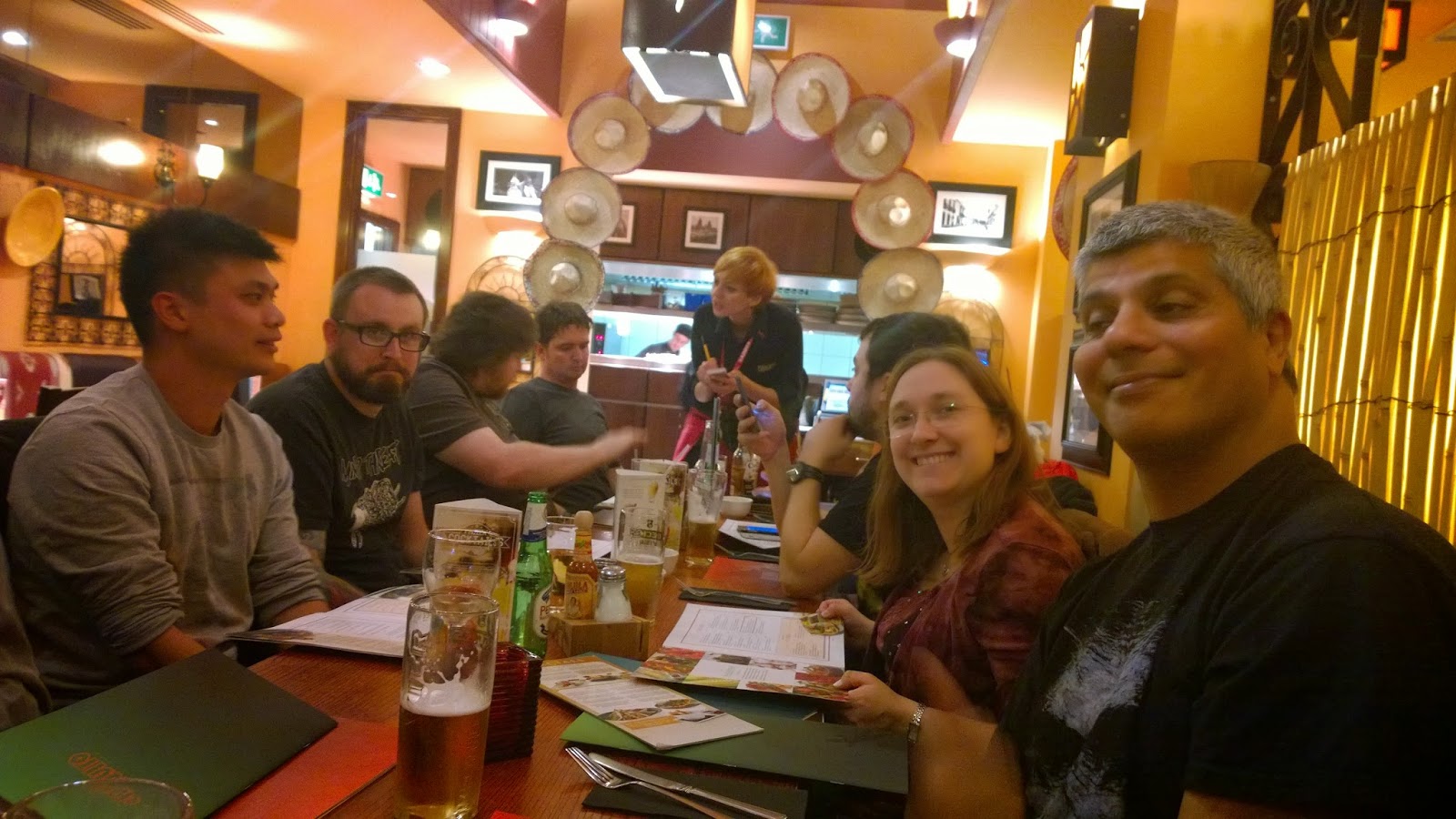 Then it was time to move onto the pub for more drinks and footie conversations, Alfonso is just as passionate about his Atletico as John and I are about our clubs, there was a lot of banter and giggles and over the course of the night, the group dwindled down to the last of us hardcore hobbyists, although a few driks became a few too many for Terry, bless him he even took his shoes off and curled up with John on the sofa after this photo was taken. 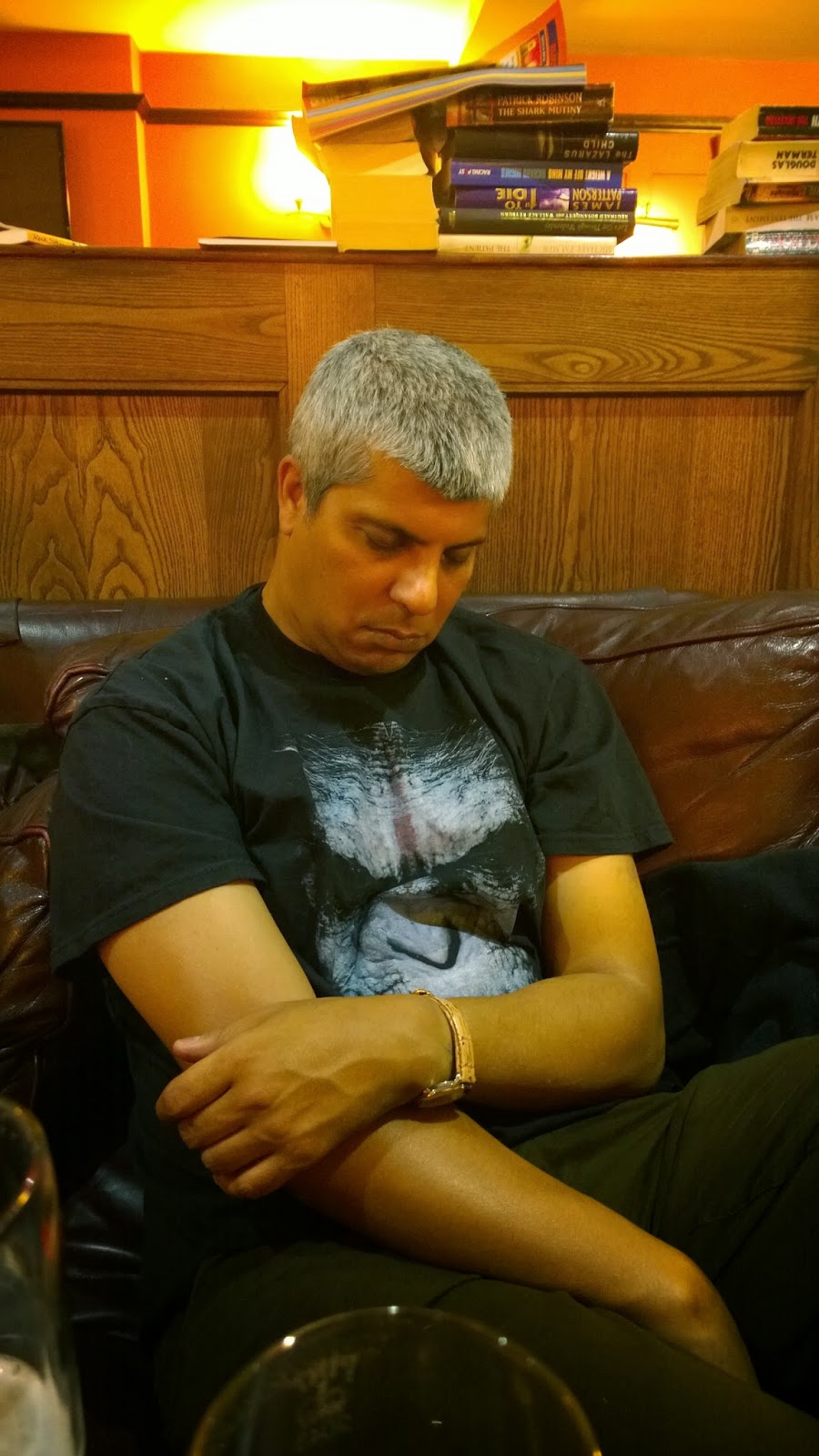 Then it was back to the Guesthouse, an altercation between Alfonso and a group of noisy "guests", Terry being eaten by his camp bed, me thinking i  had lost my wallet and finally falling asleep at 3.30, with my headphones in because Terry is a snorer. What a day!!

Day Two started within the fugue of last nights alcohol and i thought my hayfever was kicking in, but as the day wore on and i started to get a temperature and a bad headache, it became apparent i was coming down with some sort of virus. I struggled through several hours of theory and attempts at painting NMM but it was getting harder and harder to concentrate or even motivate myself and with a heavy heart i called it a day, a couple hours early to catch the train back home. I still had time to buy Alfonso's bust he sculpted for his classes and workshops and pestered him for some advice on my two current projects, my ogre and Morko bust. I was glad i asked as he turned it into a 15 minute lesson for the whole group encompassing a little more colour theory. Despite the noise from the kids that attend the venue to play their damn card games and the guesthouse i had an amazing weekend, met one of the true greats, made friends and along the way learned a thing or two as well. Happy painting!! 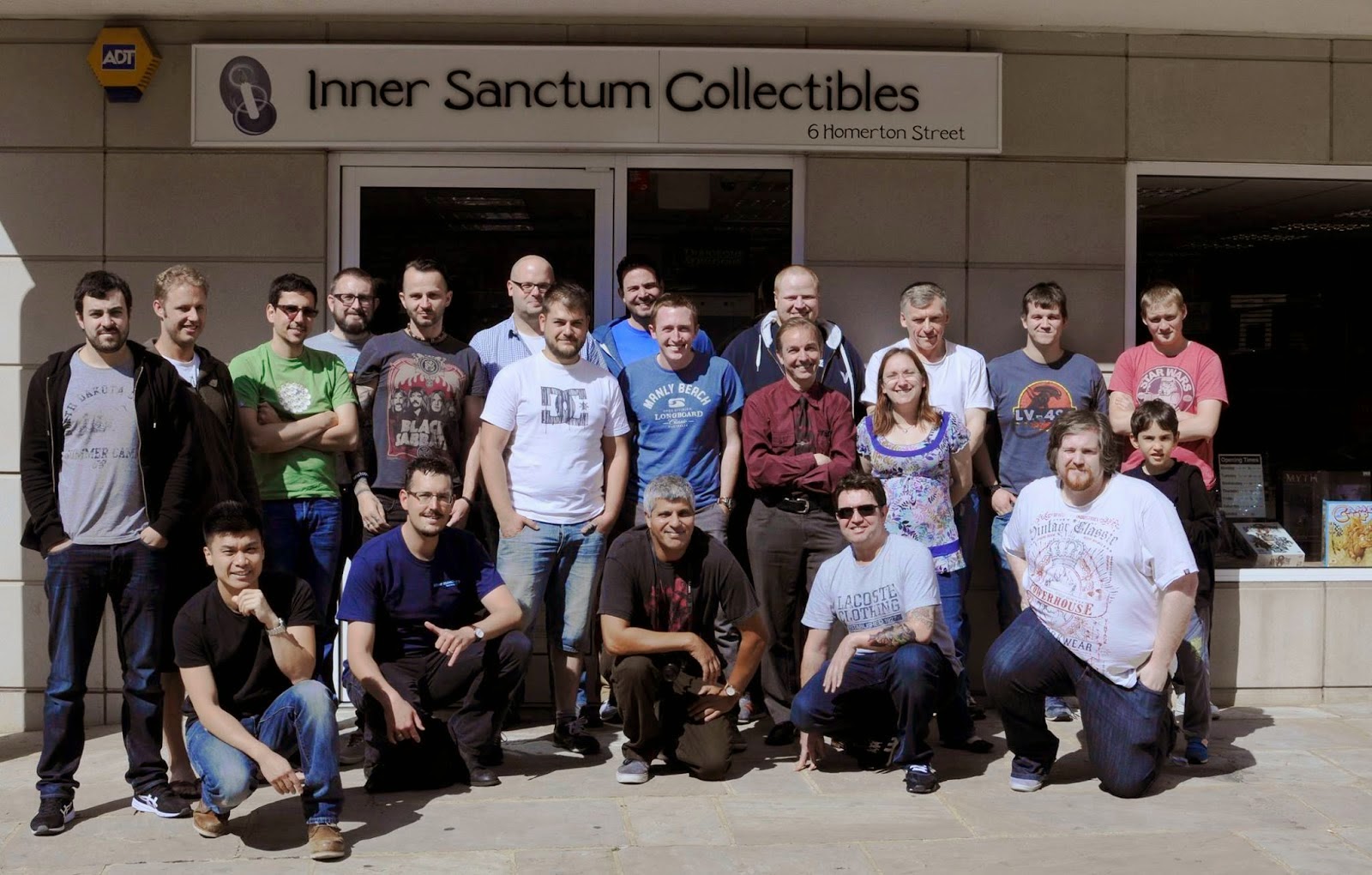 My Inspirations and friends